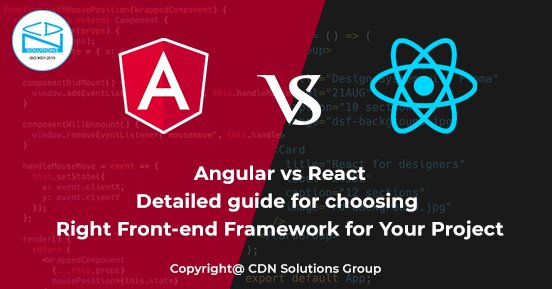 08/23/2019 There are innumerable articles out there where we found a debate or deep discussion whether React or Angular is the better decision for web advancement? Making participate in such debates and discussions we pen down this article, just with the reason that not a single post over the same subject is providing this information in such a single way.
A React vs Angular comparison is the most popular discussion amongst the mobile world. React and AngularJS are both advanced, widely adopted JavaScript (JS) technologies that we use to create interactive single-page mobile apps solutions. The number of JS tools for fast single-page mobile application development is constantly growing, making the choice of which technology to rely on more challenging for us as web developers.
By the medium of this content, you will figure out how Angular and React platforms both intend to take care of comparative front-end issues however with altogether different methods of reasoning and in the case of picking either is just a matter of individual inclination. To think about them, we will construct a similar application twice, once with Angular and after that again with React. They both the technologies have no comparison with one another, nevertheless, sometimes the mobile app developers get confused to select the best one between Angular and React.
So, here presents a comparison between both the frameworks:
Data BindingReactJS supports one-way binding, it means that the flow of data only in one direction. The implementation of dependencies helps the singularity to separate from the classes and the risks of error can be minimized. Also, the one-way data flow plays a major role to control complexity. So, it’s much easier to debug the self-contained components of large React applications similar to larger Angular JS applications.
Angular uses a two-way data binding which connects the Document Object Model (DOM) values to model data. It means, if for user interaction with the field a new value is provided to the app it will result in the update of both the view and the model. The only drawback Angular’s two-way data binding approach is its negative impact on performance. For each binding, it automatically creates a watcher. During development with angular, we found that the app has too many watchers for bound elements.
ArchitectureAngularJS is based on the MVVM (Model-View-View-Model). There are is a list of tools and features like forms, routing options, data-link, change detection, HTTP implementation and many more make Angular more user-friendly.
React is only based on MVC (Model-view-Control) model, so you will have to use other libraries like Redux and Flux as a controller or react-router for navigation.
Dependency InjectionThe Dependent Injection is somewhat dubious, that it conflicts with current React view of sensible programming and length. it’s a software system design pattern that helps in creating elements reusable, reparable, and testable. Dependency Injection is that the preferred pattern utilized by app developers and most of the frameworks implement – however React.js, apparently, doesn’t. It seems React incorporates a dependency injection system inbuilt JSX, and you almost certainly already use it.
AngularJS automatically finds suitable injected objects with parameters like $routeParams, $filter, store, and $scope. $inject and $provide are the two functions that build dependency injection doable within the AngularJS framework. However, the inherent container for dependency injection with React is missing. it’s created possible by the inclusion of instrument modules, like Browserify, RequireJS, ECMAScript six modules. it’s one of the many points of comparison between AngularJS and ReactJS.
Performance and ImplementationAngularJS has lots of interactive features and tools that make it popular. It is a JS open-source front-end framework that is mainly used to develop single-page web applications(SPAs). AngularJS has now become a top choice for startups because the options and features make possible to start project faster and smoother.
When comparing React JS Vs Angular JS, it is important to know that ReactJS is a UI library built by Facebook. React gives us the ability to logically think about our frontend sites and apps. It’s also a really fun and quick way to build the projects we dream up! React lets us build out our interactive UIs declaratively. Hence, you need to add external component libraries to have the same number of features. You will need to add elements for “routing” to force unidirectional flows, to call APIs, set up tests, manage dependencies, and more
Playing FieldBuilding React applications require very little base knowledge. This is one of its big benefits! It’s very easy to get up and running with React if you’re coming from an HTML/CSS/JS background.
AngularJs is mainly plain HTML, and it mainly makes use of the plain HTML template and passes it to the DOM and then the AngularJS compiler. Angular Platform allows us to work with components and hence we can use them again which saves time and unnecessary code.
In the endBoth Angular and React are great for writing single-page mobile applications. But they have their own structures and concepts. Some programmers may say that React is better than AngularJS or vice versa. What’s really best for a given project, however, depends on the requirements you have and how you use these frameworks.
Both React and AngularJS are currently used by many businesses, news, and travel companies in the USA, the UK, Canada, France, Germany, Australia, and other countries.
In short, if you are looking for flexibility and simplicity, it is better to use React.js. However, if you need the most efficient way to organize and boost your application with a complete tool, AngularJS remains your best solution.
CDN Software Solutions is USA and India base software, web and mobile app development company helps you leverage these versatile frameworks and save time. We have a team specialize developers who are capable of building business-centric web and mobile applications as per the requirement and model you can choose. Connect with us via +1(602)626-7419 or Get a free quote HERE.